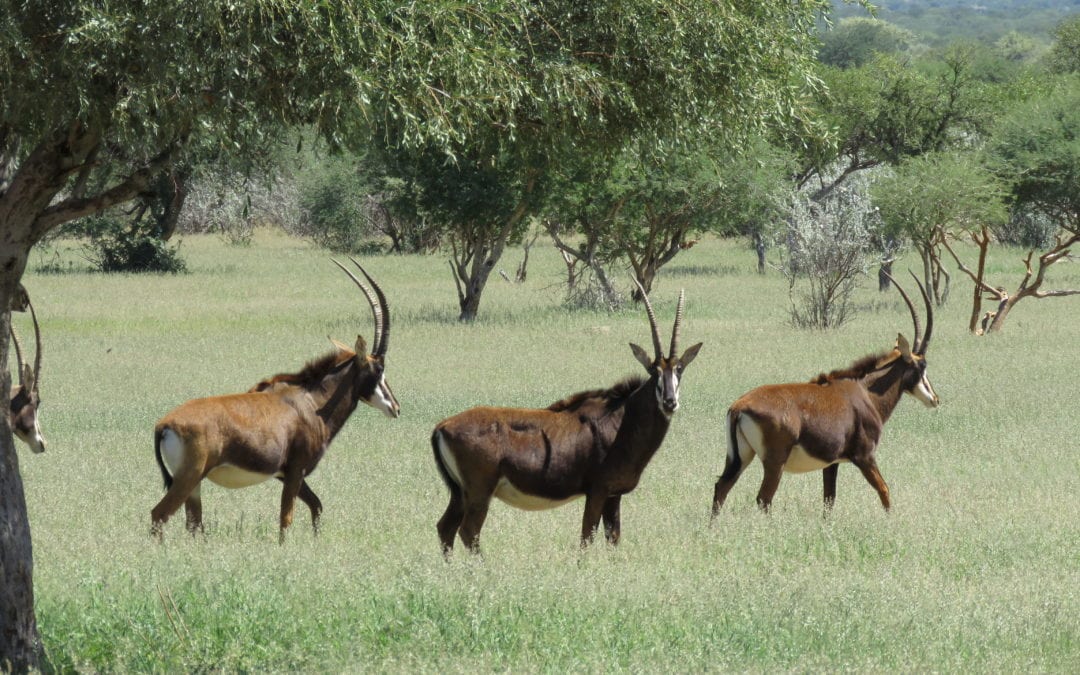 There isn’t just one reason why Namibia – and Ohorongo Safaris – should be your next destination if you want to experience Africa. There is probably not another country on the continent that can serve up such a diverse cocktail of what Africa is all about, from the lush and wet Caprivi to the tall, red sand dunes of arid Sossusvlei. You will stand in awe of the rich diversity of Namibian animals and plants and you’ll be able to do so in peace and quiet – thanks to the lowest population density in Africa, it is hardly overrun by tourists. Quite the contrary, in fact.

The oryx is one of the most commonplace Namibian animals and cuts a particularly striking figure with its distinctive, nearly straight horns and contrasting markings on its legs and face. The South African oryx (Oryx gazelle) is also Namibia’s national animal and features on the country’s coat of arms. Locally, it is mostly called by its Afrikaans name, gemsbok. The gemsbok is also the largest member of the Oryx genus and males can weigh 240 kg (528 lb) and stand around 1,2 m high (47 in) at the shoulder. Males and females look very similar and are often mistaken for each other. Males’ horns are thicker, while females’ are a little longer, but thinner.

The kudu is even more striking with its spectacular spiralling horns and imposing size. The greater kudu can exceed 300 kg (660 lb) and stand 1,6 m (63 in) tall at the shoulder, making it one of the largest antelope. They have several vertical, white lines running down the sides of their bodies and the bulls have throat beards. A mature greater kudu bull stands back for few predators except the large cats because of its size and their calves are, therefore, more frequently targeted than the adults.

By comparison, the springbok – neighbouring South Africa’s national animal – is positively dainty, but all the more athletic for it. The “spring” in their name is Afrikaans for “jump”, their defining characteristic when running being that they perform spectacular jumps high into the air as they speed along the African savannah – usually fleeing from predators. Its light-brown coat and distinctive, white underbelly are separated by a dark-brown stripe and their horns curl inwards. Interestingly, the springbok can survive without water almost indefinitely if it has adequate access to succulent plants.

The African elephant is the largest terrestrial animal and there are still a few places left where you will find these animals in the Namibian countryside, notably Damaraland in the northwest, close to Ohorongo Safaris. They are also commonplace in the national parks, the Etosha National Park being the closest one to Ohorongo. These behemoths can’t see very well but have an acute sense of smell. It is believed that there might be as many as 60 000 muscles in an elephant’s trunk, which they use as a hand to pick things up, dust themselves, smell, and touch things. They even use their trunks as snorkels when swimming in very deep water. Elephant bulls can weight up to 6 tonnes (13 300 lb) and stand up to 4 m (13 ft) tall at the shoulder.

The rhinoceros is one of the most threatened Namibian animals and space-age technology is being used by nature-conservation agencies in Southern Africa to track them without disclosing their location to poachers. You can see these big herbivores in Namibia’s national parks. The larger white rhino is lighter in colour and has a flat, square lip because it is a grazer. It has quite a relaxed, amiable personality. The smaller, darker black rhino, by contrast, is quite and aggressive and abrasive beast, best given a wide berth. It can also be distinguished by its pointed mouth, which is adapted for browsing.

Horses – With and Without Pyjamas

Zebras are close relatives to horses, their main distinguishing characteristic being their bold black-and-white striping. Each’s striping pattern is unique, just like a human fingerprint, and can be used by scientists to positively identify them. It might look like striped pyjamas, but they are surprisingly well camouflaged in the long grass. Actual wild horses can also still be seen in Namibia in their natural habitat. There is a well-known herd between Windhoek and Swakopmund and it is suspected that they stem from a herd that was first brought to Namibia just after World War I. They have adapted to survive in this hostile environment on the fringe of the Namib desert.

Of course, this being Africa, lions are amongst the animals roaming the Namibian plains, with several active lion-conservation projects running in the northern Namib. Don’t be surprised to find signs warning you against lions and elephants wandering around campsites in the national parks! These muscular animals are amongst the largest of the big cats, with the males sporting a majestic mane. They grow bigger in Southern Africa than anywhere else, with a large male sometimes topping 225 kg (nearly 500 lb).

There is a huge colony of Cape fur seals at Cape Cross, about 350 km (217 mi) southwest of our lodge. Interestingly, the Cape fur seal is the only seal species in the world with external ears. They are the largest of the fur seals and a particularly big male can weigh in at an impressive 300 kg (660 lb). They are not just Namibian animals and can be seen along the coast of South Africa too, as far east as that country’s city of Port Elizabeth.

See It All – Stay with Us

Get away from the rat race and visit Ohorongo Safaris in the Kunene Region of Namibia and see all of these and countless more treasures. We are tucked away in a secret corner of the Namibian highlands, close to the Etosha National Park to the north and the world-famous Skeleton Coast to the west, so named because of all the shipwrecks along its length. Opt for our luxurious lodge or step it up with a truly African experience closer to nature at the Ohorongo Safaris Tented Camp. Our luxurious wood-and-canvas tents are as much tents as they are suites. Let your African adventure begin with us!