The History of Sossusvlei 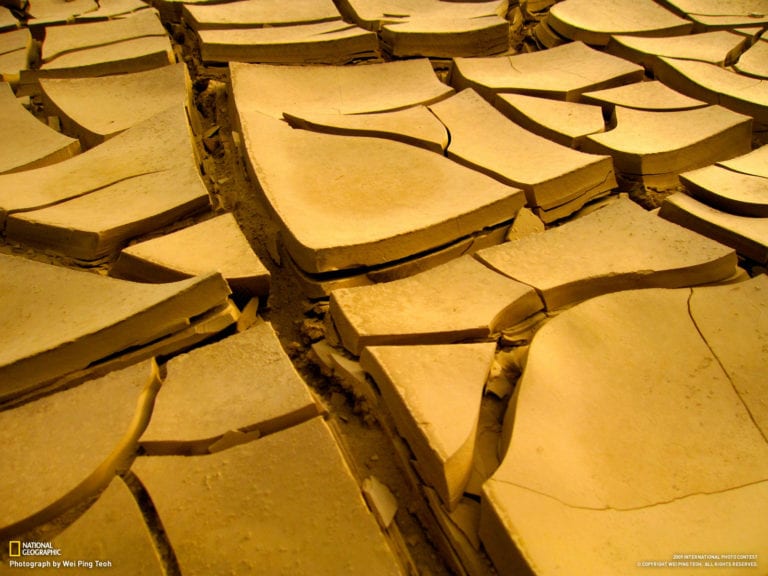 Sossusvlei, and the nearby Deadvlei and Hiddenvlei, are salt-and-clay pans in the Namib and amongst the foremost tourist attractions in Namibia, thanks to the unique natural features of these places. To be accurate, they would not have existed if it were not for the Tsauchab River, which isn’t really a river in the normal sense of the word, if you were to look for it on a satellite photo. Zoom out on the satellite image of Sossusvlei on Google Maps and you’ll see the dry Tsauchab riverbed running all the way from here to its origins in the Naukluft Mountains, about 150 km (93 mi) to its east.

The Tsauchab is an ephemeral river, which means it is dry most of the time and only flows during seasons of exceptionally high rainfall in the Naukluft Mountains. This water runs off as flash floods towards Sossusvlei, filling the pan temporarily. This water action has also carved out the Sesriem Canyon, near the settlement of the same name. This canyon is up to 30 m (100 ft) deep and only 2 m (6,5 ft) wide in places and well worth a visit.

Like the river to which it owes its existence, Sossusvlei is usually dry and, even when flooded on rare occasions, is an endorheic basin, meaning that any water that ends up here drains into the desert and never reaches the sea. Indeed, “sossus” is Nama for “dead end” or “no return” and “vlei” is “marsh” in Afrikaans; the name therefore basically means “dead-end marsh”.

This is, alas, as far as the Tsauchab is ever allowed to go and, in its efforts to reach ever further west, it has formed these mesmerising pans, of which Sossusvlei, Deadvlei, and Hiddenvlei are the most spectacular and frequently visited, their white, flat, salt surface in stark contrast to the towering, orange Namib dunes that serve as a backdrop – here, amongst the highest in the world at up to over 300 m (1000 ft) high. The highest dune in this part of the Namib towers imposingly over Deadvlei; it is 325 m (1066 ft) high and appropriately called Big Daddy dune.

Therefore, Sossusvlei and its smaller cousins came into being over many years and formed thanks to the Tsauchab’s tireless efforts to make one last dash for the Atlantic after it has built up a head of steam during an exceptionally rainy season and rallied the full might of its Naukluft waters – only to end in defeat again. And thanks to its perpetual failure to accomplish its mission, we have these spectacular sights to look at today, which are unique in the world and the subject matter of many a Namibian photobook. If you’re in the area, be sure to visit the Sesriem Canyon and all three pans, and see if you can get to the top of Big Daddy!

Even the dunes around Sossusvlei are no normal dunes but are called “star dunes”, because they are formed by winds that change direction a lot and they are, therefore, sculpted from all sides. These dunes usually have three or more irregularly shaped “arms” and don’t occur in too many places; in fact, only around 8,5% of the world’s sand dunes are star dunes. They are mostly seen in the Namib, the Badain Jaran (China), the eastern Rub’ al Khali (Arabian Peninsula), and the Grand Desierto de Altar (Mexico).

The dead trees on Deadvlei’s floor make for an eerie atmosphere and one is acutely aware of the millennia it took for this place to become the exceptional natural jewel it is today. These camel-thorn trees sprang up way back when Deadvlei was not saline and enjoyed a regular supply of water from the Tsauchab. Later, the climate changed, and the sand dunes crept nearer, cutting off the path of the river – and the trees died. Their skeletal remains are all that reminds us that, once, this was a green corner of the Namib.

Only the hardiest plants, such as the salsola and nara, survive this forbiddingly harsh environment now, sustained by the little moisture that reaches them by way of the Atlantic sea fog that drifts in from the west. Scorched nearly black by the sun, some of these trees are estimated to have been dead for as long as 700 years. They have not petrified but are so bone dry, they simply don’t decompose any further.

Hiddenvlei is the least visited of the three pans and only a 2-km (1,25-mi) walk beyond the end of the road. It might be a little more modest in terms of its size, but it is usually quieter too and a great place to enjoy the quietness of the Namib. While you’re here, cast your eyes down and look for gemsbok, springbok, and hyena tracks. A little harder to spot might be the tell-tale signs of the presence of burrowing animals, such as the Namib gecko. You might spot the odd spider and beetle too. Occasionally, the black-backed jackal, bat-eared fox, aardwolf, and Cape fox might also leave behind their tracks for the hawkeyed to spot. Stay at a lodge in the area and come here for an entire day.

Sossusvlei and Deadvlei attract many more visitors than Hiddenvlei and are, therefore, also best visited in the early morning before most people from the surrounding lodges arrive – and while it is still cool. As fascinating as the history of Sossusvlei and its cousins may be, there is a lot more history and sights to experience in Namibia. Why not work your way up from the south and see the famous ghost town of Kolmanskop, then Sossusvlei, and then travel further north, through Solitaire, Swakopmund, Windhoek, the Namib-Naukluft National Park and, eventually, the Skeleton Coast and Etosha National Park in the north? Each place has its own unique history, fauna, and flora and there are many lodges to stay in along the way.

The Etosha is a must-see and you’re in luck, because the Ohorongo Safaris Lodge and our nearby tented camp are close to Etosha and the other natural wonders and attractions of the Kunene Region. Stay in our luxury lodge or have an authentic African experience in a semi-permanent wood-and-canvas tent that effortlessly combines luxury and being close to nature. Visit any time of year, bring your camera, and be sure to stay a while, because Namibia is a big country and it takes a while to get to see everything.