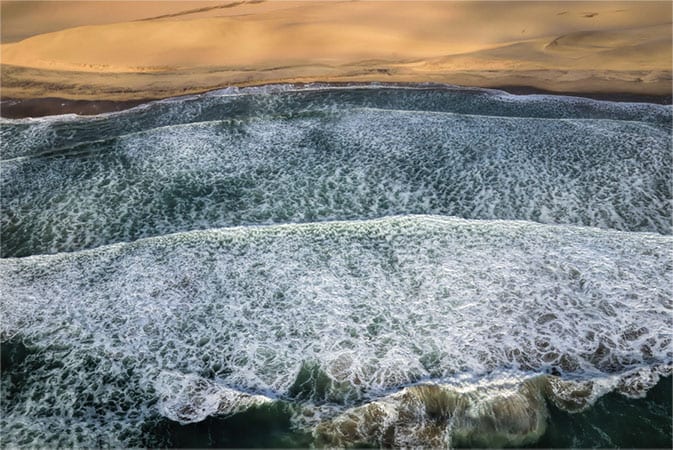 The Namibian coastline is unlike any other in the world. It is a harsh environment, where a cold Atlantic Ocean meets an enormous desert and, in some places, the massive, red sand dunes slope down steeply right to the ocean with hardly a beach to speak of. In fact, because of frequent strong winds blowing out to sea, the dust plumes over the Atlantic can often be observed on satellite images. It goes without saying that, if photography is your thing, this is an unforgettable place to visit.

The northern part of the Namibian coastline is called the Skeleton Coast and while, sadly, the name originates from the whale bones once left behind by the erstwhile whaling industry, most modern-day Namibians know the name to rather refer to the numerous skeletal remains of shipwrecks littered along the coast. In fact, it is often called the world’s largest ship cemetery. The number of shipwrecks can be attributed partly to the cold, north-flowing Benguela current causing dense sea fogs that can drift inland for several kilometres and that was notorious for surprising ships’ captains, causing them to run their craft aground. However, the often-stormy weather, unpredictable currents, and rough seas played their part in many a disaster too.

The dynamics of the sea and wind working together cause shifting sands and, bizarrely some of these shipwrecks are now half-buried in the sand, sometimes a few hundred metres inland where, once, there was sea. The wreck of the Eduard Bohlen which stranded in 1909 is one such example. The Dunedin Star and Otavi are also on the beach and no longer in the sea. Of course, these shipwrecks make for great photography subjects.

Much of the northern Namibian coastline is incorporated in the Skeleton Coast National Park, a 16 000-km2 (6200-mi2) reserve that was established in 1971. The southern part of the park is only a few hours’ drive west of Ohorongo Safaris and accessible as part of a multi-day excursion by vehicle. The mostly inaccessible northern part of the park is best visited by way of a fly-in safari. Both of these options can be arranged if you use Ohorongo as your home base.

While human populations are mostly absent from the Namibian coastline, one inhabitant is plentiful and that is the Cape fur seal. These seals congregate in their thousands along the coast, especially at their Cape Cross and Cape Fria breeding grounds. This is the largest of the fur seals and the only seal with external ears. It frequents the coastal water of southwestern Africa and southern Australia.

Some other fauna along the Skeleton coast is also unique in that these animals have adapted to survive in this inhospitable area. Some of these animal’s only source of moisture is the sea fogs that drift in from the Atlantic and remarkable “fog beetles” like the Namib Desert Beetle have shells that are textured and ridged to allow moisture that condensates from the fog to trickle down their bodies to their mouths. Amongst the bigger creatures you may be lucky to spot in this part of the country are Namibia’s famous desert elephants, as well as lions, rhino, oryx, brown hyena, and zebra.

The Namib along the Skeleton Coast is also home to the world-famous Welwitschia mirabilis, especially along the Welwitschia Plains. It derives almost all its moisture from the sea fogs. However, what is even more interesting that it is often referred to as a living fossil, because many of them are over 1000 years old and some may be almost double that age. This also explains its weathered appearance. It has only two leaves that looks like straps and never stop growing, becoming very long and frayed as they grow longer and longer and get blown about on the desert floor.

Namibia’s largest city and capital, Windhoek, is located inland, right in the middle of the country, but there are, nevertheless, a few notable settlements on the Namibian coastline. The largest of these is the port and fishing city of Walvis Bay and the most popular for visitors is probably the resort town of Swakopmund, 40 north of Walvis Bay. Namibia’s lobster industry is centred around the small town of Lüderitz on the southern Namibian coastline. Just a short distance inland from Lüderitz is the abandoned diamond-mining town of Kolmanskop, a must-see for a traveller that loves photography! Even further south, on the border with South Africa, is the town of Oranjemund, the Namdeb Diamond Corp’s company town and the country’s diamond-mining centre.

The entire Namibian coastline between Walvis Bay and Lüderitz – and for a distance of more than 50 km (30 mi) inland – is essentially an enormous dune sea with the dunes at Sossusvlei towering up to 300 m high (close to 1000 ft). These are amongst the highest in the world. Near Sossusvlei is the hauntingly beautiful Dead Vlei with its flat, white, salt surface brilliantly juxtaposed with the massive scale of the orange dunes in the background and the dead remains of a few skeletal trees still defiantly jutting out from the barren valley floor. There is possibly not a better place in the country if you’re into spectacular desert photography. Most of the 320 km (200 mi) of Namibian coastline south of Lüderitz to the South African border is a diamond-mining area and off-limits to the public.

Ohorongo Safaris – Home Base At Ohorongo Safaris, you can choose your accommodation. Stay at our lodge or opt for an unforgettable tented-camp experience where you stay in a luxurious, semi-permanent wood-and-canvas tent with all the amenities and comforts expected of a hotel suite, but with little to separate you from the sounds of Africa. Our menus are adaptable and tailored to the needs and preferences of our guests and nothing is set in stone – your experience is tailored to your needs. Enquire about our airport shuttle service and day safaris. If you want to fly in via light aircraft, you can, because we have airstrips at both the lodge and camp. Stay with us for the African experience of a lifetime.